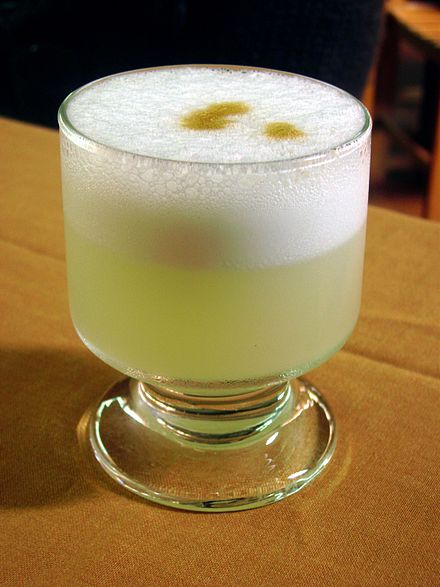 A Pisco Sour is a cocktail typical of South American cuisine.[A] The drink's name comes from pisco, which is its base liquor, and the cocktail term sour, in reference to sour citrus juice and sweetener components. The Peruvian Pisco Sour uses Peruvian pisco as the base liquor and adds Key lime (or lemon) juice, syrup, ice, egg white, and Angostura bitters. The Chilean version is similar, but uses Chilean pisco and Pica lime, and excludes the bitters and egg white. Other variants of the cocktail include those created with fruits like pineapple or plants such as coca leaves.

Vigorously shake and strain contents in a cocktail shaker with ice cubes, then pour into glass and garnish with bitters.[1]